Colorful and expansive, Caroline Faison is as surprising as her lovely
Greensboro shop. 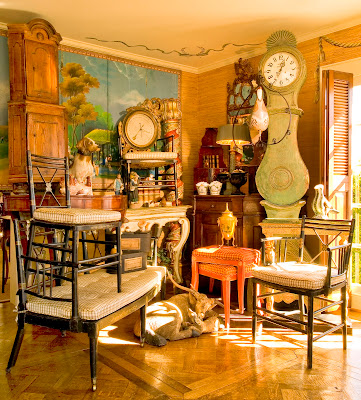 Live and learn. If ever there was a successful woman who has taken that maxim to heart it’s Caroline Faison, who opened a small consignment shop filled with “dreadful things” in Greensboro, N.C. some 45 years ago and grew it into one of the most well-respected, and simply lovely, antiques shops in the country.


How lovely? Well, on those occasions when North Carolina is mentioned in casual conversation to those in the antiques trade, the next sentence is invariably along the lines of, “Caroline Faison has a shop there. Do you know how lucky you are?”
For those lucky enough to have discovered the treasure-filled gem, elegantly tucked into a series of cobbled-together buildings, it’s difficult to believe that Faison is entirely self-taught.


“I would love to say I have a degree from Parsons, but I’m from Charleston, W.V., and I think my parents had praying hands over a sideboard,” she says with a laugh. “The truth is that I was young and nice and people were kind to me from the outset. The people of Greensboro have been wonderful. I’m sure that in the first few years I was in business I must have been dumber than dirt. But if I told somebody something they knew wasn’t true, at least they knew I thought it was.”


As example, she relates, “When I first opened, I visited an antiques dealer in town and asked if he would give me a couple of things on consignment. He said, ‘Yes, this is a pair of Queen Anne chairs.’ So I grabbed the chairs and ran back here, polished them and looked them up. The encyclopedia said 1720-40 so that’s what I dated them. A woman walked in and said, ‘If I thought those were really Queen Anne chairs I’d buy them for my sister.’ And I said, ‘Well, they certainly are! The man that owned them is very respectable!’ ”


The woman did purchase the chairs which turned out to be circa 1920, “and has been one of my best friends in all the time since,” Faison says with a bemused shake of her head. “I have 20 stories like that from those early years, maybe 220. I was just flying by the seat of my pants.”


Plus, she acknowledges, those were different times. “There was a bank here years ago called Community, and a man who started it named Bill Black. If it weren’t for him I wouldn’t be here today. He would lend me $5000 for a weekend sale in Pinehurst, and I would keep a few loans going for trips to Europe. In the beginning, the trips were to England, before I got the nerve to go to France and Italy and the Scandinavian countries. Bear in mind, all of the trips were financed by the bank and I had to be able to pay them back. That made me very careful about what I chose to buy.


“Then, about two years after I opened, an older woman who worked with me part-time said, ‘I’ll give you $50,000 to let me work everyday.’ So we drew up the papers and I took her money to the man who owned the two buildings adjacent to mine and we shook hands on a deal to purchase them. Then I headed to England to fill up the new space.”


As she made money, the young entrepreneur was able to buy nicer things. “It was luck and timing and tenacity, coupled with a very real passion for collecting. They say I will drive to Idaho for a broken Delft bowl,” Faison says today with a self-deprecating laugh. “But it’s a wonderful thing to find something that’s old and beautiful. It fills up my soul. It thrills me. Sometimes I can’t believe that, somehow or other, it’s in the back of my car. Now, because of that feeling, there are people all over the United States that will call me and say, ‘I have a thus-and-so.’ ”


Over time, Faison developed many close friendships in the design community, and she credits the look of her shop to tips she gleaned over the years, as well as the time she would spend pouring over “beautiful rooms in magazines.” And then there was Otto Zenke, who was responsible for many elegant interiors across the Piedmont and Sandhills regions of the State, as well as the Governor’s Mansion. “He was the most fantastic designer with shops in London, Palm Beach and New York, and he lived here,” Faison says. “He is really responsible for educating people in this area about 18th and 19th century English furniture.”


Today, Caroline Faison Antiques is best described as high-end continental, and Faison herself enjoys a worldwide reputation as one of the most original and adventurous collectors and dealers in the business. She’ll be bringing some of her most favorite pieces to Market, such as a rare William and Mary chest, and “big, dramatic pieces, just things that I love,” she says. “I don’t really plan it all out. I just put my whole heart and soul in and do it!”