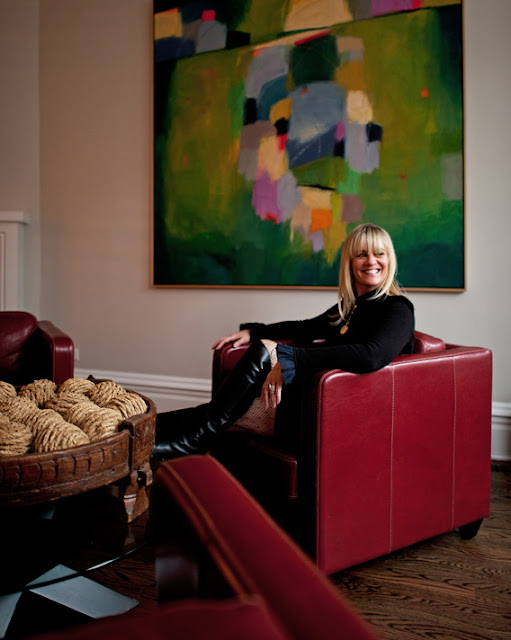 The daughter of an “antique-aholic,” Chicago designer Julia Buckingham Edelmann recalls enduring many afternoons sitting on the back staircase of one dingy “joint” or another while her mother searched for treasures. ”She would drag me from shop to shop and I would think, ‘This is the most boring, horrible thing that I have to be a part of as a child,’ Edelmann says today with a laugh.

She doesn’t remember exactly when her love affair with aged objects began to take hold. Only that it did. Now, far from those cob-webby afternoons of her childhood, Edelmann is much more apt to describe antiques as, well, sexy.

And “sexy” is an apt descriptor of Edelmann’s work as an interior designer. Her firm, Buckingham Interiors & Design, LLC, has gained renown across the Mid-West for mixing styles and eras to create surprising, whimsical and truly unique environments. It’s an approach she will explore during a special presentation at the Antique & Design Center at Market Square during Fall Market entitled, “Modern-ique: Integrating Antiques and Artifacts with Modern Design for Today’s Lifestyles.” The seminar is set for Saturday, October 22, 2011 at 2 p.m., and will take place in the Mezzanine Level seminar space in historic Market Square. Expect available seats to go fast.

In relating her story, Edelmann says, “I became a designer in a serendipitous fashion. I majored in fashion merchandising at the University of Arizona and went immediately to a big department store in LA for management training. Eventually, I wanted to come home to Chicago, so I took a job at Neiman Marcus on Michigan Avenue.”

Three children in five years were accompanied by numerous moves on the home front. “We’ve had 11 homes in 25 years of marriage, mostly because I love to renovate,” the designer says. Almost all were historic properties, including three gut re-habs that were scheduled for tear down in the exclusive Kenilworth suburb of Chicago’s North Shore.

While Edelmann admits that living in one room at a time during these renovations, not to mention functioning in makeshift kitchens with a growing family, could be daunting at times, her husband was the ideal partner for the adventure. “He runs a brand consultancy agency, so he’s very design oriented as well, and he has great spatial abilities,” she says. “We made a great team and we had a lot of fun, much to the chagrin of our children!”

Along the way, Edelmann discovered an innate talent for infusing her old houses with something new and different. Sometimes it was a fantastic new paint color, at others a nine-foot-tall zinc building façade in an entryway or a huge center table she created out of an anchor and chain from the Great Lakes Naval Reserve.
“I traveled the world to find interesting artifacts,” she says. “I was always gathering, seeing things and envisioning them in a different light. I never bought just to fill a warehouse. I bought what my eye was drawn to and I was very particular about what I purchased, because I don’t believe you purchase a piece for a space; I think you buy something and find the perfect space later, and then relish the comments.”

When her husband became president of a design firm in Cincinnati, Edelmann began to frequent the many antique shops of O’Bryonville, Ohio. “There was one store in particular that just blew me away. It was two floors in an old, 1900’s building, and it was owned by four different women. Each had a room in the building, and each worked one day a week and one Saturday a month. I spent so much time in there that one of them finally said, “Julia, why don’t you join us?” So she did.

It was an exhilarating chapter in her career. “I began to spend every Friday, Saturday and Sunday morning in the field antiquing,” Edelmann recalls. “I’d take my kids to school in the mornings, and spend the afternoons hanging out with, and learning from, all of these characters in the antiques world. I drove a Suburban and when I would pull up to the school to pick up the kids, the other mothers would say, ‘Put your windows down! We want to see what you bought today!’ or ‘Can we shop the back of your truck?’ ”

It wasn’t long before the young antiquer had a following of regular customers who appreciated her eye for the special and unique. That eventually led to her first foray into interior design, when a customer who had purchased many items from her requested assistance in positioning all of the pieces inside a new riverfront property. “I did it all by instinct,” Edelmann remembers. “Really, measuring was secondary. It was just me eye-balling everything. Looking back, I was very, very lucky!”

When the family moved back to Chicago, Edelmann launched a new antiques venture with a partner. “We had this idea that if we traveled all over the world and brought back furnishings and accessories and art, we could furnish empty houses and then have special, four-day events where we would sell it all. The pair knew they had hit on a winning concept when people began to line up around the block to get inside one of their opening-night cocktail parties.

Not surprisingly, many who bought during these events sought out Edelmann for additional design assistance. “I remember the first time someone wanted window treatments, and I thought, ‘Wow, I better get over to the Merchandise Mart and educate myself!’ ”

Educate herself she did. Hard work and word of mouth about the young design talent with a keen eye for the old took care of the rest. Today Edelmann and her firm are typically at work on 30 to 40 different major design projects at any given time. Her showroom, located in the burgeoning design district of the West Town neighborhood of Chicago, has been gaining fame as an art gallery, with significant exhibits featuring the likes of Francine Turk and international fashion photographer Victor Skrebneski. Her latest home is being featured in the new book Chicago Spaces: Inspiring Interiors from the editors of Chicago Home + Garden Magazine, and Edelmann devotees can enjoy a more regular fix by reading her posts as the Chicago contributor to the nationally known MaterialGirls blog.

Through it all, in nearly every space she creates, there can inevitably be found that one, out-of-the-ordinary, aged object. In the hands of a lesser design talent, it might appear out-of-context. But for an old hand like Julia Buckingham Edelmann, it simply sets the work apart.

Posted by Amanda Kinney at 9:11 AM