Serendipity- The Cup
by Karen Luisana 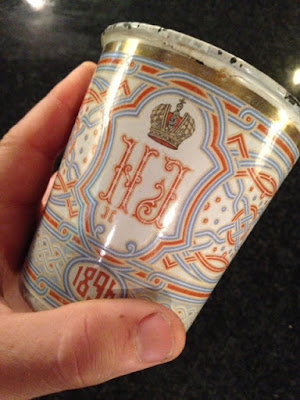 It’s sitting on a bookcase in our home- Doesn’t really go with anything we have in there, but for this piece- It doesn’t matter. It’s part of a miraculous story in my life.

In fact, so many of the beautiful things in our homes evoke feelings of nostalgia, memories of our childhoods, things that tie us to others and make us smile every time we walk through our personal spaces. Antiques do this for me.

Jerry was one of my closest friends in the 1980’s. He was a talented designer and he taught me so much about antiques and interior design. When we realized that he had contracted AIDS, we were all horrified, for in those early days this meant a certain death sentence for him.

He continued to work in spite of having some pretty bad days. He persevered for a long time, mind over matter you know, until he was forced to bed for his last months- just too weak to move a round any more.

We were traveling to France on a buying trip for a container load, one of my great loves in this wonderful world of antiquing…There’s nothing better than the treasure hunt is there?! Before leaving, I went by to see Jerry, thinking that it might be our last time to see each other. I asked him if there was anything that I could do for him and to my surprise, he sat up and asked for a piece of paper and pencil. On it, he drew a picture of a cup with an insignia of an N and an A entwined. Then came the story of Nicholas and Alexander at their coronation in Russia. Apparently, Jerry was an avid lover of Russian history and the famous “Cup of Tears” had been something he had had a chance to buy once in his lifetime- passed on it because of the high cost, and had always regretted not buying it. He also never saw another one, but in a museum. I stuffed the paper in my pocket,, gave him a big hug and said good bye.

While in France that week, I had shown my buying buddies the drawing and our eyes were peeled when any enamelware came across our paths, but of course, nothing came up.

This was in January and a very cold one indeed. We had been there for two thirds of the trip when it actually snowed so hard that we couldn’t go out in it in the truck. Ah, an opportunity for an adventure, we said, so off to the train station to get out at random stops- Snoopervisory trips we called them!

As we debarked from the train, I saw a distant sign saying “Antiquities Ruske” or Russian Antiques….I asked my friends if they wouldn’t mind humoring me on this quest for Jerry and they all said, of course. “Lets go.”  Once against the window, there did seem to be an enamel cup of blue and white, but no insignia. We rang the door bell and waited for a while, but there did finally appear a tiny old fellow wearing a beret with his wife on his elbow. I quickly described what we were looking for and he immediately turned to the window and said, yes, of course, C’est la- la meme--allor! NOOOO- On the back side of the cup was the famous insignia of the Russian King and Queen’s coronation!  I couldn’t believe it. I was week in the knees and started to cry uncontrollably. For those who know me well, when exhausted and emotionally spent, something beautiful will usually get some tears going. Can’t help myself.

This was before cell phones and I didn’t know if Jerry was still alive- The cup had a price tag of $550.00 on it in Francs (He had told me that we he could pay $300.00), so I had to go back to the flat that night and call his partner before spending so much on it. The shop keeper promised to hold it for us for a day so we went home and called .

Well, our Jerry was still hanging on by a thread, so we rushed back on the train the next day and rang the same doorbell. It took a while for them to open, but they did. The wife turned to her husband and said in French- I told you soooo. Apparently, a gentleman had come in right after we were there the day before and wanted to buy the cup… His wife wouldn’t let him sell it- “She was crying”, she said- “I know she’ll be back!”  Rob and I paid the difference and we grabbed the cup!

A couple days later back in the USA, we rushed to Jerry’s bedside with the cup in hand.. He hadn’t spoken or opened his eyes in two days. I put the cup on his chest and placed his hands around it and said- “Jerry- Your angel brought me to it---It’s a miracle!” He proceeded to open his eyes and said in a very small voice- “It’s a miracle- thank you!” Jerry didn’t speak again. He went back into his dream world and died the next day.

I will never believe that this was a random happening. This was part of a plan to help my friend as he was dying. He was smiling- and what’s better than that?!
This was meant to be and I was meant to be there in France at that moment in time. Serendipity or miracle or something much more? I wonder.

Posted by Amanda Kinney at 9:08 AM